Will Patching, Author
The Remorseless Manuscript
And a record of the writing process 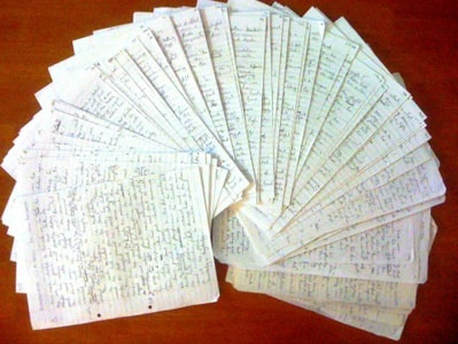 The original draft of Remorseless - over 100,000 words of scrawl...
The reason I used to type a handwritten draft myself was not just because my handwriting is illegible; I preferred to do it this way as it allowed me to start the editing process while transferring the rough writing to a computer.

So why not type directly into a PC first time round and save the time?

Well, for me, using a pen to scribble allows freeflow thinking, whereas typing into the computer as I am doing right now engages a different part of my brain - this is a process and therefore uses the right brain. Creating uses the left half...

Using a PC also means you have the edit facility, thesaurus, research button, spell check, grammar check at your fingertips, and they are all ready to interrupt your thinking - along with emails, Facebook and Messenger etc. I didn't want those interruptions happening while I was getting the story down, plenty of time for that stuff later.

The other reason is simplicity itself - I can write anywhere if I have some paper and a pen. I don't really need the PC to write a first draft, so why use it?

Well, that's what I used to think.

Over the last couple of years I have trained myself to type my first drafts directly into the computer. At first, all of the problems mentioned above were holding me back, getting in the way and stopping the 'flow state' I need to be in to write really good stuff. Mutilated took many months to come together, Gaslighting rather fewer and The Hunter was drafted on a PC in under a month...

Fortunately, with a great deal of perseverance and not a little profanity, I am now getting up to speed. It seems that I am able to think and type at the same time! Mutilated took many months to come together, Gaslighting rather fewer and The Hunter was drafted on a PC in under a month...

The logs - then and now
The two drafts - Remorseless and The Hangman
Similar wordcounts, but only 17 days of writing by hand compared to 29 days on the PC
On the left is a scribbled record of how much writing I achieved per day during my Montreal house-sitting stint between 15th July and 5th August a decade ago as I drafted Remorseless.

It also records whether I did any exercise in the form of running, with several nine mile stints recorded, whether I fulfilled my house-sitting duties and watered the plants or didn't bother as it rained, and how much booze I needed to lubricate my brain cells, measured in bottles of Heineken!

Maybe you can see the note on the 25th of July when I lost count of the beers so just wrote 'loads'... I went to Jo Jo's Bistro - a fantastic live music venue with an excellent blues band playing that night.

The total word count of 95,000 turned out to be an underestimate: when I typed up the draft I found I had some 120,000 because I estimated an average of 225 words per side instead of 275 as it turned out.

Total hours of physically scribbling? Just 102. That's about the same in terms of hours for a normal worker over seventeen working days during a three week period with two weekends off - as I had.

In theory it would be possible to churn out a novel every month or two, even with editing etc, but to write this way you need a muse - some real inspiration. Without that, I'd have nothing.

My novels also take a great deal of research, and editing is very time consuming. With my recent novels, I have edited each around a dozen times, and read the entire draft aloud, at least three times, even before sending to beta readers.

To make sure the dialogue is distinctive for each character, and the narrative runs smoothly.

Daily progress was faster without the technology 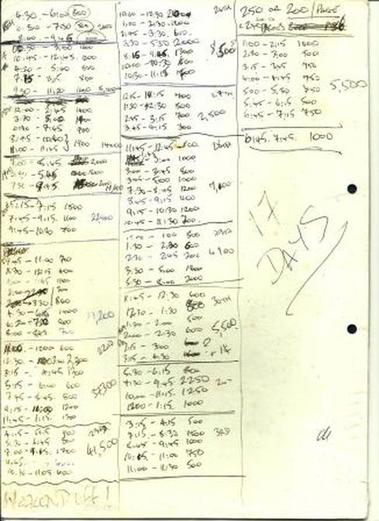 The difference is that I didn't go over any of my work during the manic ink-to-paper phase, so even with some days off,  I had the basic novel in the bag at the end of three weeks. With The Hunter, there were more days of writing and no time off for good behaviour!

And yes, I was exhausted at the end of each novel I've drafted as I find myself dreaming about the characters, waking up with them in my head, with ideas keeping me from sleeping until late and then driving me from my broken slumbers way too early.

I admit, I am a bit obsessive (my ex says I have a 'mild' form of OCD) so during this three week period I lived 'Remorselessly'; I ate, drank, slept and dreamt of Doc and Leech. The same applies for each novel I have completed.

With Remorseless, I recorded the hours I worked  each day along with the number of words I had written (underestimated as mentioned above). Some sessions just whizzed by while others left me wondering where next, so I'd go for a run or have a few beers to loosen my brain cells and gain inspiration.

My most productive day was 26th July with 8,500 handwritten words (probably 10k plus given the underestimate mentioned above - my best on a PC is 7,600). That record was set in seven stints between 10am and 11:15pm - but that was after a weekend off and my night out at Jo Jo's. My least productive were the very first day and the very last - although the latter created the epilogue so I am happy with that ending rather than the planned one with Doc dying...

This frantic flurry of writing works for me. At the end of the first draft, I have something to really work with, and the process never has a chance to feel stale or boring. The way all my novels have progressed surprised me at times and that makes writing them a better experience for me personally than reading the best tales written by other authors.

And they all do look luvverly with the black covers, and I really adore that smoking gun and as my cover designer, Brian, says - "That noose looks badass!"

﻿My style won't suit everyone

The point is, to use a style and approach to writing that you enjoy and does not hinder your progress. Some authors like, or maybe need, a lot more structure than me - but it doesn't matter. it is best to just write in the way that's most comfortable and works for the individual.

Every writer has someone who hates their work -  I certainly do - but that doesn't matter either. If you have some people who like what you do, that should be enough.
Continue reading about my approach to writing here...